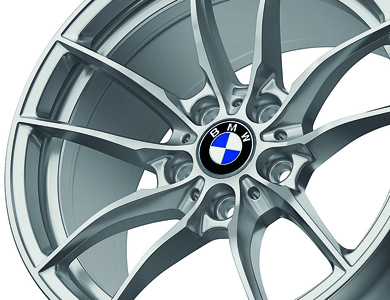 The three-layer coating is the standard paintwork for most light alloy wheels. In addition to the distinctive look, very good corrosion protection is ensured by their polyester base coat, the colouring liquid paint and protective acrylic clear-paint. 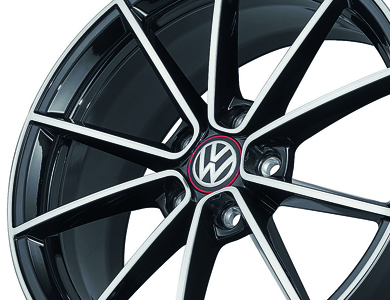 Forged wheels are ideal for this surface finish due to their fine grain structure and smooth surfaces. The following example illustrates one of the options: The pictured 18-inch wheel for the VW Golf GTI was painted black in the first step and then gloss turned. The paint disappears on the spokes and the rim flange and the silver aluminium reappears. Now the edges are trimmed by polishing and finally clear finished. 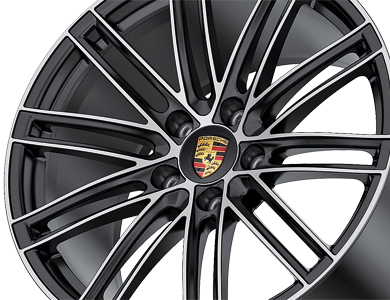 This surface version might even be the most typical within the OTTO FUCHS portfolio, but it is marked by the fact that the vent windows in the wheel are painted in colour and thus are in perfect harmony with the silver polished spoke tops. In this process, the wheel is initially primed, then completely painted with the desired colour and finally sealed with a clear acrylic-paint. Now the surfaces that are to later shine metallic are turned and then polished to a high gloss. Finally, a two-layer clear coat is applied consisting of a polyester primer and acrylic clear coat. 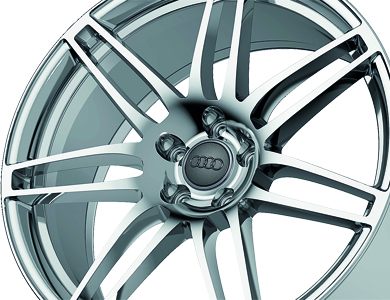 This surface variation is the fast seller in some international markets, for example, in the US. Americans love chrome and the look of the smooth polished wheels is very similar to chrome with its gloss. The fine grain structure can bring out the fine »gloss potential« of the wrought alloy. Although the wheel looks almost like a chrome wheel, it avoids the disadvantages of electroplating: the extra weight from the thin layer of chromium. In the vibratory finishing process, the entire wheel surface is polished and then clear finished. Here a degree of gloss and a surface structure is achieved with forged wheels that is not possible with cast wheels. 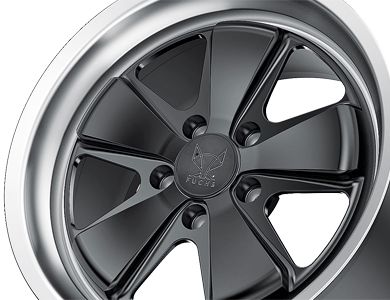 By anodising the surface, the wheel gets a very special character of genteel elegance. Anodizing only works with forged wheels. The wheel is sent through a variety of cleaning, pickling and rinsing baths before ending up in a sulphuric acid bath where current is passed through the wheel. The uppermost layer of the aluminium is oxidised here, thus converted into aluminium oxide. This results in a very hard and chemically stable layer. This anodic coating is not only corrosion resistant, but it also  provides a good adhesion base the matte black paint. The locations on the wheel that are not to be black are covered with a stencil beforehand. A clear coat sealer is no longer necessary. 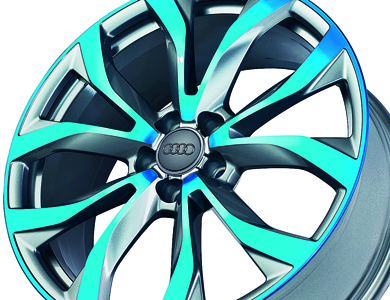 Some surface versions can also be combined. One example of this is the two-tone anodised surface. Here the wheel is provided with a three-layer coating prior to anodising, then turned in the visible area and then polished. The following anodising bath is dyed with the desired colour. Only the areas turned beforehand, that is to say the bare aluminium, are conductive and therefore the anodizing process only takes place there. This gives the wheel a really unique look. For the ultimate finish, the wheel is coated with clear finish powder to ensure the UV stability of the coloured anodised layer.

Wheels are safety-relevant components. That is why they are particularly accurately checked and tested. This begins with the first chemical materials testing and ends with hard, testing machine endurance runs.

In the tensile test, performed in-house in the OTTO FUCHS laboratory, the material properties of the alloy used are tested. The material samples of a forged Fuchsfelge and a cast rip-off serve as an example. Both tensile specimens are clamped into the corresponding test device and pulled apart mechanically. The sample of the forged Fuchsfelge first deforms before fracture occurs. The sample from the cast copy does not deform on the other hand, but breaks abruptly, even before the sample of the forged wheel deforms at all. The reason for the material response is the much lower ductility of the cast material.

With the tensile testing, cornering is simulated with different loads. For this purpose, a wheel without tyres is clamped on a test bench and loaded on the contact surface with a circumferential bending moment. The maximum permissible bending moment is of course known, because it was calculated previously. This bending moment is caused by the vertical nominal force acting on the wheel, a value defined by the vehicle manufacturer. In addition to the normal force, the horizontal side force also acts that is generated when driving through a curve. Such real maximum bending moments are between 2,500 – 10,000 Nm, depending on the size and weight of the car. The tests can now be carried out, for example, with 75 and 100 per cent of the maximum bending moment, depending on the requirements of the car manufacturer, and should thus prove the durability of the wheel.

ZWARP stands for bi-axial wheels testing [German acronym]. The test is performed at OTTO FUCHS on an outer drum. Here, a certain route is travelled, for example the Nürburgring. In the testing  process, the wheel is loaded on the outer drum through transverse movements of the test facility in two directions with contact and lateral forces.

In this corrosion test, the finish is pre-damaged or scratched with score marks down to the aluminium. The prepared wheels then undergo 240 hours of the CASS test (copper accelerated salt spray test). The wheels are positioned in a salt spray chamber here, in which the copper-doped saline is nebulised. If the finish on the wheel displays quality deficiencies, then the paint »blooms« exactly in those places.

In this corrosion test, the finish on the wheel is also pre-damaged or scratched and the wheel is exposed to a temperature of 60 degrees Celsius and 82 per cent humidity in a climate chamber for a period of 28 days. Characteristic of filiform corrosion is a threadlike (filiform) infiltration of the finish.

This test simulates possible stone chipping from by grit or stones. Here, a special test apparatus is filled with a defined mass of steel shot. This steel shot is then fired at the respective finished wheel segment under high air pressure. It is checked here whether and how the stone chipping leads to an unacceptable flaking of the finish.